The ability to control the car and not get into accidents in the first place is very important to us.

Let’s say you’ve got roughly 60 lakh rupees to spend on a car, and you’re dead set against an SUV for the daily grind. Firstly, congratulations for walking the other way. Secondly, your choice would’ve essentially boiled down to the Mercedes-Benz C-Class, which was refreshed last year to include the more powerful C300d into the range. But with the introduction of the all-new BMW 3 Series, the Bavarians have given you good reason to stop and think  more space, better interiors and the famed dynamics that used to make BMWs the eyes-shut choice for anyone with even a drop of petrol in their veins. Now, customers of this segment are said to largely drive themselves, so with that in mind  which of these is better? 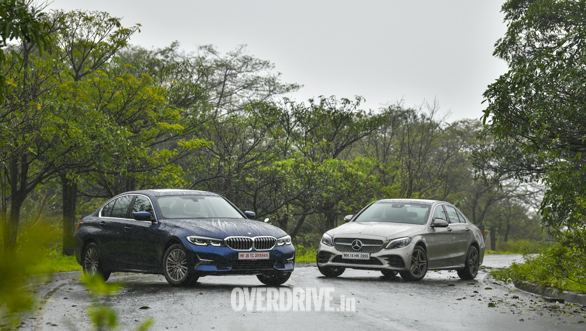 On the one hand you have the 3 Series, which in its seventh G20 generation, is brand new. On the other, the C-Class, which has been in India since 2015, with a facelift last year. The BMW has grown larger than its previous generations but its CLAR underpinnings (shared with the 7 and 5) mean it’s actually lighter than its predecessor. That isn’t good news for the Mercedes, since the 3’s 1,450kg kerb weight undercuts the C-Class’ 1,715kg by a huge margin. 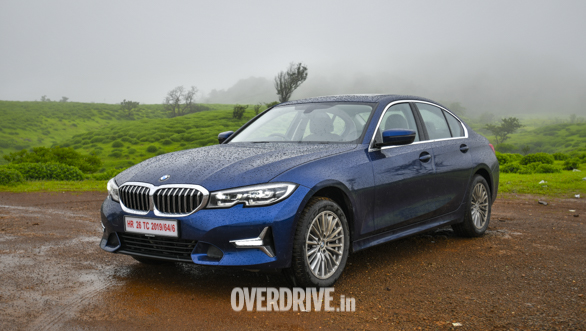 You wouldn’t be able to tell that by looking at them both though, the 3 is wider and longer, and actually has an 11mm longer wheelbase at 2,851mm. And while the grille’s grown in size (it packs active aero), the headlights are sleeker and the low, low front looks sporty, even if the new L-shaped tail lights aren’t very BMW sedan in their execution, tending towards some of the BMW SUVs we’ve seen recently. The twin round exhaust exits are a nice touch, though the chrome wishbones in the bumpers look overdone, and would like nicer in gloss black, as on the lower Sport trim. 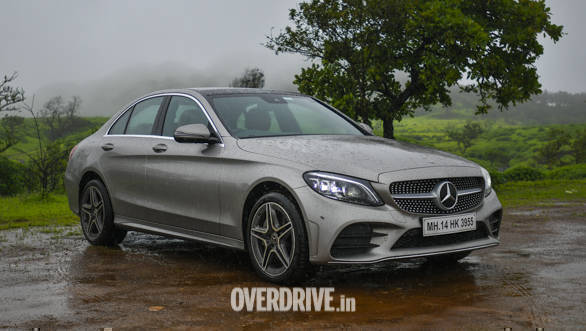 In contrast, the C-Class looks a little stubbier in profile but in this C300d AMG Line trim and this specific colour, its usually staid styling stands out with its sharper, more stylistic creases. Not least helped by the 18-inch AMG wheels and lower profile rubber (225/45 R18 vs 225/50 R17), the C-Class definitely looks sportier even if it is the more familiar looking car. Even in a rearview mirror, the C-Class’ Multibeam LED headlights look more ‘expensive’ than the 3’s, though the LED DRLs on the BMW are quite distinctively shaped.

When I first sat in the new 3 Series at a motor show, I was blown away by how much better everything looked and felt  it does appear more luxurious than previous generations. The basic layout remains the same for the most part, but the freestanding infotainment screen, digital dials, wood vinyl central console and even switchgear feel classier than before. But thankfully, the focus is on the driver. It’s amazing how low the powered seats can go, in fact, I wish the steering went a notch lower to keep up. 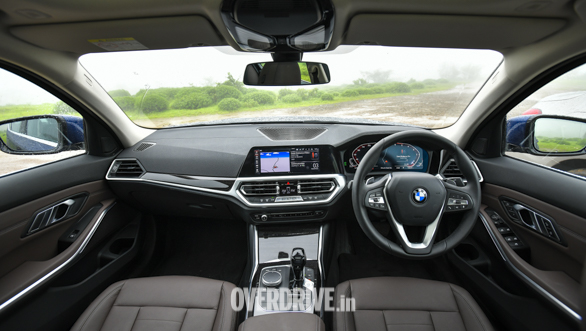 Even then, because of the low set dash and window line, visibility is excellent all around. The 10.25-inch infotainment screen is touch enabled (no gesture strangely) and the new-gen iDrive is very easy to use, even if there’s not much of it to navigate around, especially since it only offers wireless CarPlay and no option for Android users. The 10-speaker audio system does sound a bit more lively than the 9-speaker system in the Mercedes though. 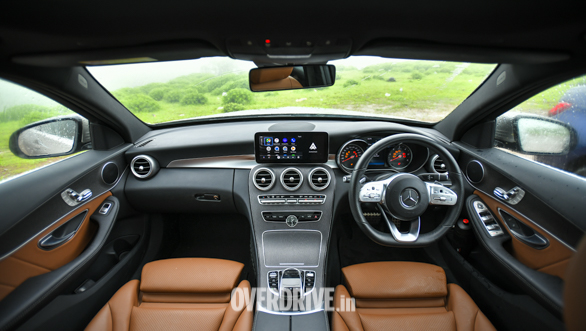 But, ultimately, in this company, the 3’s cabin feels a little basic, despite the eight (yes, eight!) buttons for lighting. The C-Class envelopes you, much in the same way that the more expensive E-Class does, and it does make you feel special with its open pore wood and silver trimmings. Sure, it’s been around longer but a recent update has seen the addition of digital dials and wireless charging. In any case, the C300d had memory seats, a massive panoramic sunroof, powered lumbar support and powered steering adjustment (not to mention both Apple/Android support) to make it feel like you were getting your money’s worth. 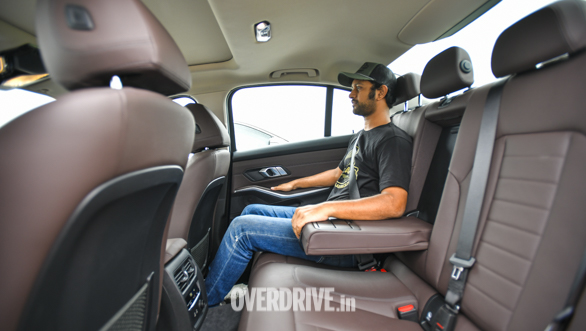 The strange thing is, the 3 Series’ seats are actually more comfortable, with better thigh support, especially in the rear where the extra kneeroom is noticeable. You can’t go wrong with either but if you’re going to have your chauffeur drive, ironically, it’s the BMW that has the more comfortable rear seat. 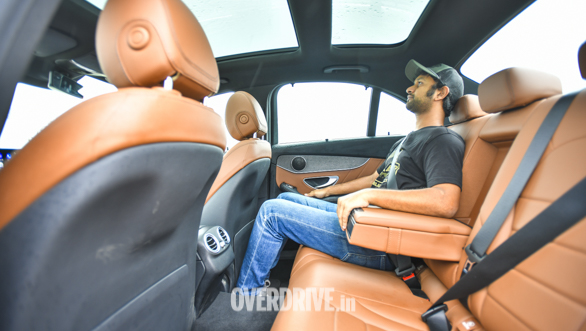 The cargo capacities of both are similar, with a bit of give and take. The C-Class has a narrow boot opening and the spacesaver eats into the height advantage it has. The 3 Series would’ve had the larger boot, except its spacesaver is packed under the boot floor for the Indian model, whereas the international model has run flats and a specified 480 litres of boot space.

The Mercedes has the advantage here with seven airbags, a collision warning system and a hood which lifts itself up for better pedestrian safety, as compared to the BMW’s six airbags. In terms of other features, both offer reverse cameras with guidelines, and can park themselves. 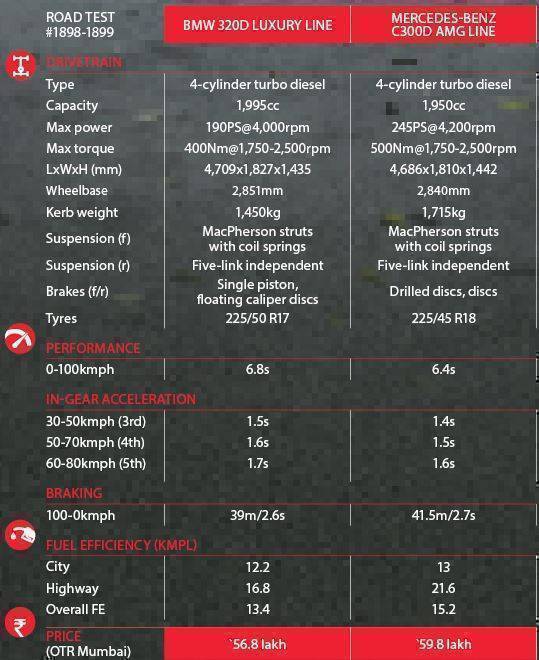 Both these sedans have 2-litre diesels under their hoods, with some key differences. The BMW has a twin turbo unit (B47) to help achieve the emissions and efficiency brief and puts out 190PS and 400Nm torque, but isn’t BSVI compliant yet. The Mercedes’ OM654 is BSVI compliant and in a higher state of tune than the C220d, peaking at 245PS and 500Nm torque. 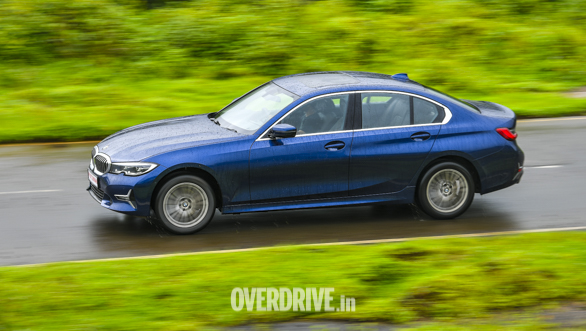 Not surprisingly, the C300d is quicker to 100kmph from standstill, taking 6.4s against the 320d’s 6.8s. Both these rear-wheel drive cars were tested in the wet, with the Mercedes spinning its wheels on the shift to second, so it has the potential to go quicker. The kickdown acceleration figures are very close too, with the BMW’s lower weight and slightly quicker shifting 8-speed automatic helping it stay in the race. Where the Mercedes, with its 9-speed automatic, comes back into the fore is in its unbelievable efficiency  here’s a luxury sedan that thinks it’s an economy hatchback! The drivetrain in the BMW feels more refined though, with a quieter engine and conservative gear shifts when you’re taking it easy. There’s a good spread of push anywhere in the rev range, and even when driving enthusiastically you don’t really need to rev it all the way out to get going. 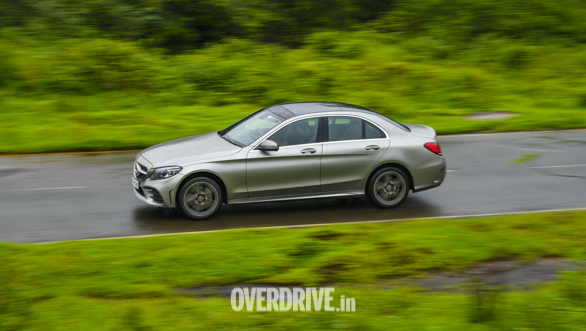 It doesn’t quite take off in the same way the Mercedes does  the C-Class has a tremendous mid-range and it shows by having more in reserve once you get to high speeds. Unfortunately, the gearbox seems to like to keep the engine above 2,000rpm even in normal city driving situations, where it sounds more boomy and gruff than the 3. Speaking of, the speed warning in the BMW over 120kmph is incessant and gets louder the louder you set your tunes. As you can imagine, that’s extremely disappointing and annoying in equal spades!

If you expect the BMW to be the better handler, you’re right. If you expect it to be less comfortable than the Mercedes, you’re wrong! A big part of that is likely to be the lower profile rubber on the Mercedes, which forces you to be careful over bad patches where you can get rattled around inside the cabin and hear frightful thuds from the suspension, if you don’t take it easy.
In the 3 Series, you can actually tackle bad roads with almost gleeful abandon. There’s a beautiful compliancy to the way the 3 Series rolls over bumps, both at low and high speeds that makes you wonder how they’ve got it so right, because it feels utterly composed even when you’re pushing it! 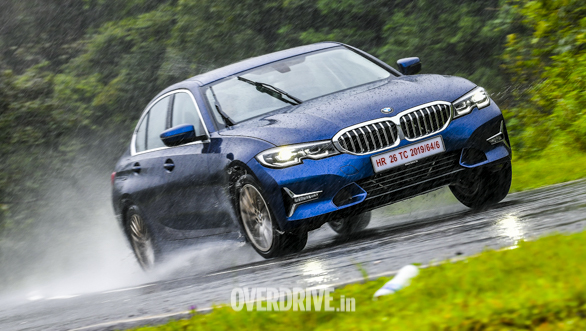 The BMW actually has a much lighter feeling steering than the sometimes-cumbersome steering on the Mercedes, though most would probably prefer the more confidence-inspiring feel of the Mercedes. I think the more nuanced driver will like the directness of the 3 Series steering and its balance. It feels a lot more natural to carry a fair turn of pace on a slick mountain road in the 3 Series than the C-Class, even if the 3 exhibits a hint more body roll. Though, memories of how quick the C300d proved to be at the BIC during our record-setting 24-hour run make me wonder if the Mercedes would feel more at home in the dry. 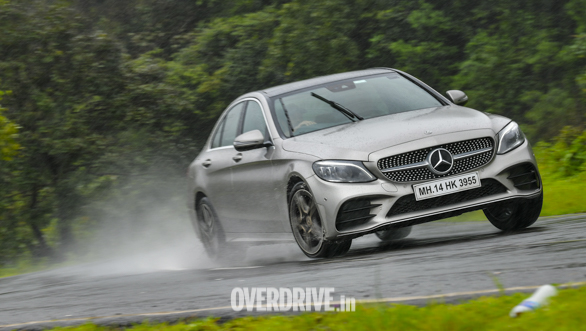 Despite packing larger cross drilled rotors, the C300d stopped from 100kmph in the longer distance than the 3 Series. The Mercedes has a slightly wooden feel at the pedal, though the bite is strong and needs a careful foot to modulate, and even more muscle to go to 100 per cent braking. The BMW offers a little more modulation at the top end of the pedal’s travel, at the expense of sometimes feeling a little spongy.

Is the new 3 Series the complete package it promises to be? Well, yes and no. It completely won me over with the way it handled Mumbai’s roads, as well as Lonavla’s twisties. And it does have a very comfortable cabin. Except, the C-Class has it beat when it comes to making you feel special, apart from making the 3 Series look a little bare. It’ll really take a dedicated BMW fan (like myself) to walk away from the C300d. 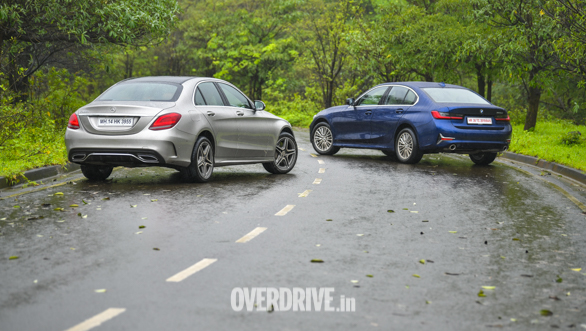 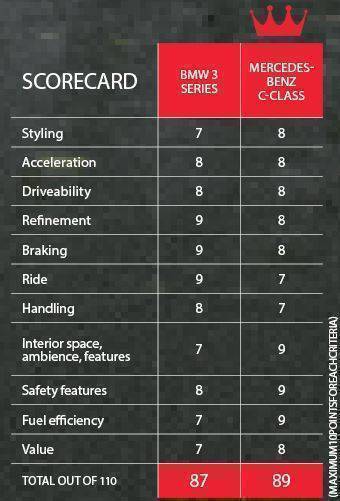 Your reached the limit of ads. Please upgrade your plan.